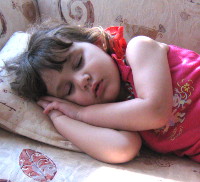 When my children (aged 2 and 3) have difficulty settling at night, I have often found that using Sound Therapy soothes them and helps them get off to sleep. Even so, our experience last night totally blew me away.

Little Eva (our 2 year old) has been unwell for several days, and yesterday was the first day she hadn’t vomited, and had in fact regained the bulk of her energy. So much so, that she was literally bouncing off the walls, running everywhere, from 5 am until 9 pm, with only a 1.5 hour nap in the middle of the day. Getting her to stay in bed at 9 pm was met with much protest (we had put her to bed hours earlier, but she kept just hopping straight out of bed again), though she did fall asleep, only to wake up around midnight screaming.

And I mean SCREAMING.

She wasn’t in pain, and a cuddle didn’t help. Her cries sounded frustrated and a little distressed. We moved her to our room so she wouldn’t wake her sister, and she thrashed around on the bed, pushing us away – very odd behaviour for her indeed. The interesting thing was that if I asked her if she would like a drink, or if she wanted anything, she would pause momentarily to consider, and then resume screaming. She even refused a drink of milk, which is usually the thing that she finds most soothing to get off to sleep.

After a good 15 minutes of this, I finally figured she had just been over-stimulated during the day, and plugged a Sound Therapy CD into my ipillow. Well! The effect was instantaneous.

The minute the Sound Therapy music started coming through the pillow, she ceased her yells. She settled back into the pillow, and put her hands out for her milk. She drank her milk, announced “It’s finished!”, handed the cup back, rolled over, and in short order fell asleep with a smile on her face.

I wish I’d thought of it 15 minutes earlier!

I think I better get some more ipillows…