A Buzz from the Bees Healing Balm Review 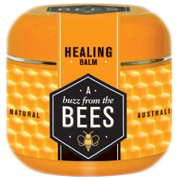 We often have reps drop in with products they think could be a good match for what we offer at Totally Sound Health, which is how I came across A Buzz from the Bees Healing Balm. I am grateful that Sophie did drop in a sample for us to test out, because it has become one of our most-used products at home.

One of my watches tends to give me a rash, and that was the first thing I tried the Healing Balm on. All I can say is… WOW! The itchiness stopped straight away, and the bulk of the rash had largely cleared up by the end of the 2nd day. I was sold on it, and have kept a jar at home every since. 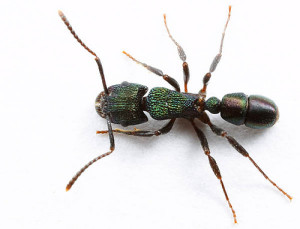 Not long after that, my 5 year old daughter came inside screaming in pain – ripping off her track pants we found several bites, and after a further search found the culprit: a green-head ant (I had to do a google search afterwards to identify the ant; I’d never seen a metallic green ant before. Apparently they are actually quite common in the metro area, and their sting is intensely painful!). I slathered on the Healing Balm, and after a very short while she had stopped crying, and the redness started clearing. The pain disappeared quite quickly, and the next day we couldn’t even see where the bites had been.
Photo by Alexander Wild

We turn to A Buzz from the Bees Healing Balm for any cuts, bites, stings, rashes or other skin issues; my daughters ask for the “bee cream” when they have any skin irritation. I can’t recommend it highly enough!

A Buzz from the Bees also produce a Moisturising Balm and Lip Balm.